Gondola rides can be an excellent way to gain a new perspective on the area your visiting. Unlike climbing an observation tower, gondolas have the benefit of moving you smoothly across the countryside, allowing you to see more views in a short time.

While some gondolas simply serve the purpose of getting the passengers to the top of a mountain to then ski down, still others are built primarily for sightseers. The latter is often the highest with the most spectacular views. Few, however, go higher than five thousand feet.

Gondolas also come in varying styles and luxury levels – anywhere from cushioned cable cars to essentially chair lifts. While both options can be lovely, the highest gondolas in the world will be enclosed. This protects passengers from the elements and minimizes the fear of heights.

To gain a fuller view and perspective on the countryside around you, taking a gondola ride can be invaluable. It is an excellent addition to any adventure. The following list of the five highest gondola rides in the world is sure to thrill any stalwart traveler. 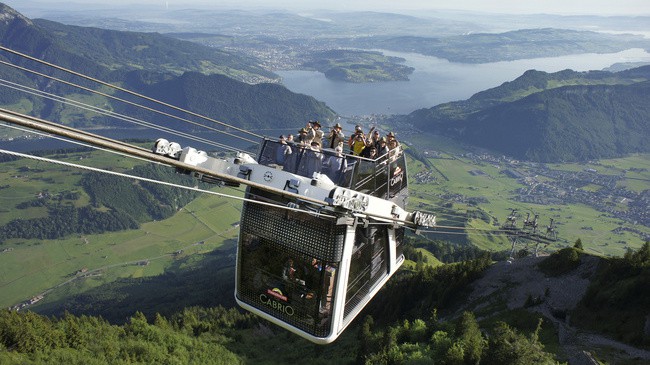 While many gondolas are newer inventions, the StanserhornCabrio in Nidwalden, Switzerland has been around for a long time now. The original open-air, wooden coaches began traveling upward toward Stanserhorn in 1893. Much has changed since, but the views remain the same.

One of the main attractions of the StanserhornCabrio gondola is the open-air roof deck on the top of the gondola. Each gondola car on this lift is quite large, seating substantial groups of up to sixty people between the car and on the roof. The roof deck provides a spectacular view.

Due to the design of the StanserhornCabrio, the roof deck is above the cables, providing an unobscured view of the mountains. Instead of a cable support system above the gondola car, the car is supported by two cables on either side. This keeps them out of view for the riders.

The entire ride takes about twenty-five minutes to reach the summit of Stanserhorn and travelers can ride the gondola from April to mid-November. As you can be outside during the ascent, good weather is really a must for this gondola. Also, there are a couple of attractions at the summit.

The main draw at the summit of Stanserhorn is the revolving restaurant called Rondorama. The restaurant offers three-hundred and sixty-degree views of the surrounding Swiss mountain ranges. While the restaurant seats two hundred, only eighty enjoy the revolving platform.

Though the views are truly breathtaking, the restaurant has a very down-to-earth feel as it is self-serve except for large groups of diners. This means the restaurant essentially functions as a sort of cafeteria. The food, however, provides a splendid experience to match the views around you.

Another bonus at the top of the gondola ride is the circular walk. The walk is fully staffed with rangers and guides who help tourists identify the plants and surrounding mountains. This adds to the allure of the whole adventure rather than just the gondola ride experience.

The entire StanserhornCabrio experience is a truly Swiss one, too. When it opened in 1893, the gondola drew visitors from around the world. The new rendition is no different. The redesign of the gondola was completed by Swiss engineers with 90% Swiss materials. It is unforgettable. 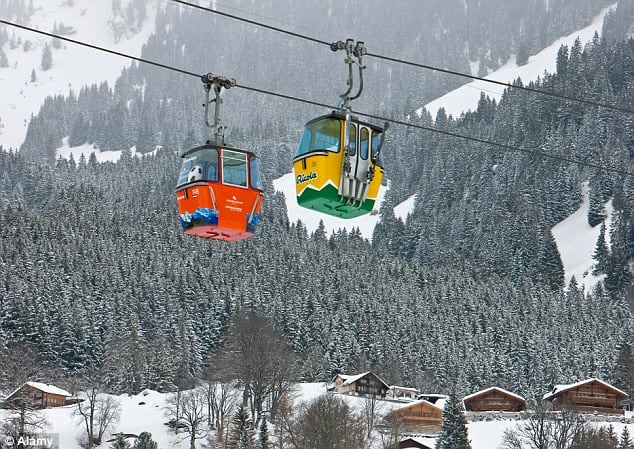 The Hua Shen Cableway in Shaanxi, China earns the second slot on the list of highest gondola rides with an awe-inspiring high point of six thousand and eight hundred forty-five feet. The cable car travels up the five sacred peaks of Mount Huashan, an otherwise treacherous journey.

The mountain considered a sacred place in Chinese tradition, proves one of the most dangerous hikes in the world. However, people continue to make the claim in order to witness and visit the various sacred locations along the way and take in the breathtaking scenery on the trail.

To bypass the death-defying hike up the mountain, visitors and pilgrims can take the cable car up to the summit. In order to reach the entrance to the gondola, travelers travel up a five-mile road to Wamiaogou. From there, the gondola travels to the North Peak, taking seven to eight minutes.

Alternatively, there is a second gondola rout beginning in Donggoukou which travels to the West Peak. Unlike the ride to the North Peak, the West Peak route makes a stop at the White Sparrow Temple. Since there is an added stop on this route, the trip takes a bit longer at twenty minutes.

The other peaks do not have direct cable car routes to them. Instead, travelers can hike from either the North or West Peak to the South and East Peaks. Though it is possible from both gondola end-points, getting to the other two peaks is much easier from the West Peak than North.

Of course, the other alternative would be taking the gondola back down the mountain after hiking up. This makes the traveler able to stop at all the pilgrimage sites along the hike while saving you from hiking up and down the treacherous mountainside needlessly.

One thing to keep in mind if you plan on venturing to the Hua Shen Cableway is that wind can delay the scheduled times. Mountain tops can get significantly more wind than other locations, so be prepared for slightly longer wait times if the wind picks up.

Switzerland seems to have a monopoly on stunning mountain ranges and gondola rides. The Grindelwald-Mannlichen Gondola Cableway not only earns the distinction as one of the highest gondolas in the world at seven thousand and three hundred feet, but it is also one of the longest.

At the time of the gondola’s construction (and actually for many years after), the Grindelwald-Manalichen Gondola Cableway was in fact the longest cable car in the world. Since its construction, however, a couple of longer ones have been built. It is now the third-longest gondola.

When the gondola was first built in 1978, it was conceived as a solution for the needed additional transportation to the top of the mountain for ski resorts and summer tourists and hikers. Up until that point, there were not enough avenues of transport to serve the many travelers each year.

It seems, based on the number of passengers carried by gondola, that the creators of the project had a valid point about the needed transportation. The gondola has the capacity to carry nine hundred people per hour up the mountain and each car seats four people comfortably.

The project took over a year to complete and cost a high price tag, even when compared with today’s currency standards. The entire project cost twenty-two million francs to complete. More than half the cost was financed by the Grindelwald resort itself out of pocket from the beginning.

The money spent on construction was seen as an investment rather than an expensive project. While the Grindelwald slopes have a fairly normal ski season, the Manalichen slopes are sheltered. The gondola provides the resort and visitors with a significantly longer skiing season.

The cable journey to the summit actually consists of two separate cables. There is an intermediate station at Holenstein to change the cables. Even still, the whole trip is relatively short to reach the top. With only thirty minutes for the whole ride, it is an easy addition to your adventuring.

Whether you are planning on taking the gondola ride for skiing, hiking, or just for sightseeing, you will not regret the trip. The views throughout the ride are breathtaking and the summits and hiking trails in the area offer magnificent views of the snow-topped mountain ranges. 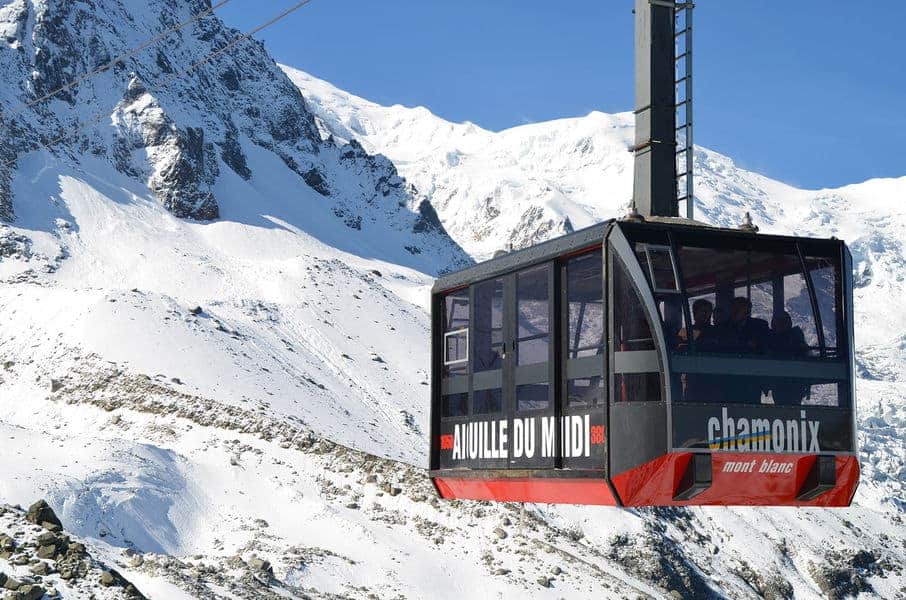 The dazzling twelve thousand and six hundred and five high Telepherique de l’Aiguille du Midi in Chamonix, France makes all the other gondolas before it on this list seem small. From the gondola and the summit, visitors can see a three hundred and sixty-degree view of the Alps.

The whole ride takes two stages to complete and reach the summit. If timed correctly, riders can have lunch served to them at the stop between cable cars. Not only does the halfway point also have beautiful views, but it is the perfect place to enjoy a French lunch, surrounded by nature.

Once the main gondola reaches the top of the mountain, visitors can move onto another gondola ride. While not as high or long as the initial cable car jaunt, this smaller trip goes over the Glacier du Géant to the Pointe Helbronner in Italy. This part is only open June-September.

If you are traveling on the second cable car during the warmer months, you can actually take a third cable car even further into Italy. This gondola ride finishes at the Courmayeur resort on the Italian side of Monte Bianco. There are certainly less enjoyable ways to cross country lines.

Another attraction at the summit of the mountain is the Step into the Void experience. This feature is certainly not for the faint of heart. Essentially, the attraction consists of a glass walkway over the open cliffside.

For those considering the venture up the Telepherique de l’Aiguille du Midi gondola, bringing warm clothing is a must. Since the summit of the mountain has an elevation of seven thousand and six hundred feet, it can be significantly colder at the top than at the bottom.

Luckily, you can also plan on eating a meal at the top of the summit in the cafeteria. While the restaurant itself is not particularly unusual (though the food is excellent), the location makes it all worth it. The restaurant and cable car to the summit are both open year-round.

At only a twenty-minute ride to reach the summit via the Telepherique de l’Aiguille du Midi, the trip is a must if you are in the area for travel. The views simply cannot be matched and, in the summer months, it can be a great way to see the Alps of France, Switzerland, and Italy.

Along the way, there are a number of stops and cable car changes along the way. At each point, you can stop the journey and travel back down in the downward gondola. During the last stretch, leading to Pico Espejo, riders often feel a noticeable decrease in oxygen and a colder climate.

From the top of Pico Espejo, visitors can see the famous Virgen de Las Nieves (Virgin of the Snow) statue and the Bolivar Peak. No matter which way you turn, there are spectacular views to see. At the highest point, you are virtually at the level with the clouds, surrounded by them.

As of 2016, when the gondola reopened after closing for repairs, the cable car has been nicknamed “Mukumbari,” meaning “the place where the sun is born.” On a clear day, visitors can actually see all the way to Barinas City, which is a hundred miles away from Pico Espejo.

See also  11 of the Best Beaches in Los Angeles to Surf, Swim & Play All Year Round

Two major considerations when adventuring to the Merida cable car are the time of day and the time of year. Due to the high elevation, the summit is often surrounded by fog and clouds. Early morning or December-February offers the best chances of clear weather.

If you are feeling a bit more adventurous, you can exit the cable car at one of the lower stations on the way down and hike the rest of the way. If you plan on doing that, still make sure to take the gondola ride up to the summit at least. You will not want to miss the spectacular views.

The Merida gondola has been delighting visitors since its inception in 1960. After a few years of repairs and rebuilding starting in 2008, the new improved gondola was reopened in April 2016. It remains one of the most spectacular and highest gondola rides in the world to this day.