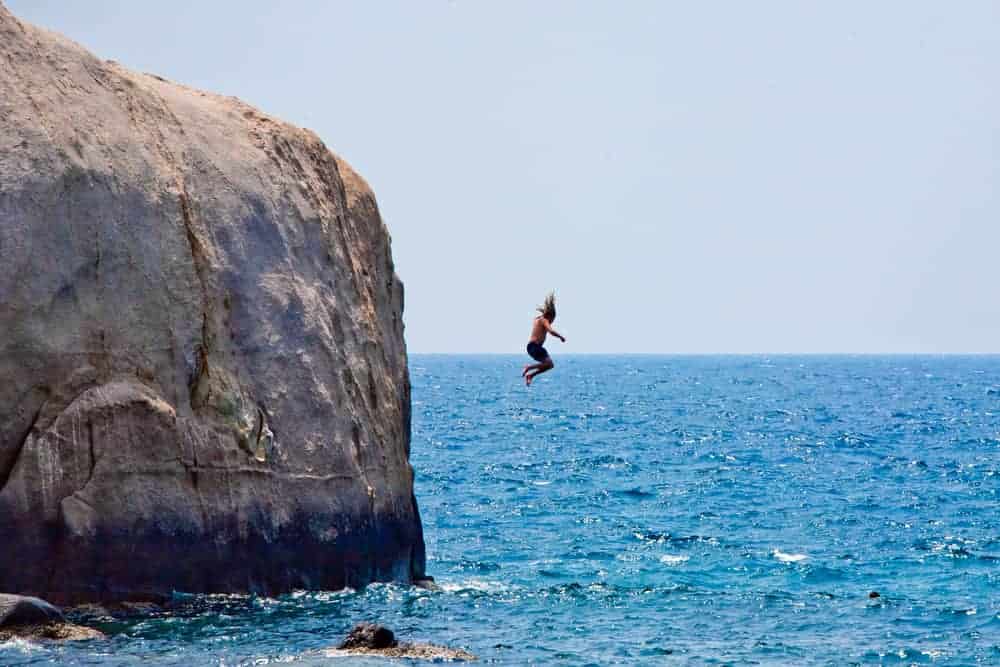 Cliff diving is one of the more dangerous extreme sports. Essentially, a diver climbs to an exceedingly high point above water and then dives or jumps in. While the process seems fairly straight forward, there are numerous things that could go wrong, including the diver’s death. 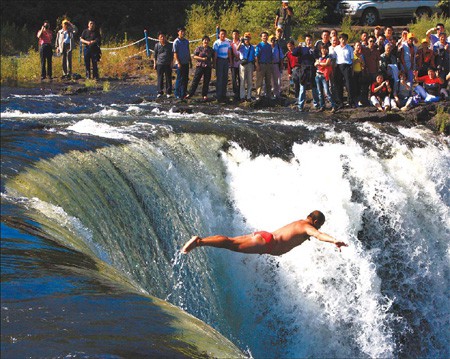 While fifty-eight feet may seem lackluster compared to the other numbers on this list, Di Huanran’s cliff dive was no small feat. Most cliff divers jump into a standing water, but he jumped over a waterfall. This brings up a number of serious difficulties not otherwise present.

For one thing, waterfalls have a significant undertow that standing water does not. This means the water is forcefully pulling you under the surface. On top of that, waterfalls typically crash into rocks at the base. This is a serious threat to even the smallest miscalculation by the diver.

To make the situation even more extreme, Di Huanran was fifty-one years old at the time of his jump over Diaoshuilou Waterfall in the Heilongjiang province of China. Most cliff divers are significantly younger than that at the height of their careers. His age did not stop him.

Commemorating his feat, Di Huanran secured the Guinness World Record for the highest waterfall jump in 2008. As if that was not enough, after the first jump, he climbed back up to the top and jumped in three more times in front of a huge crowd. 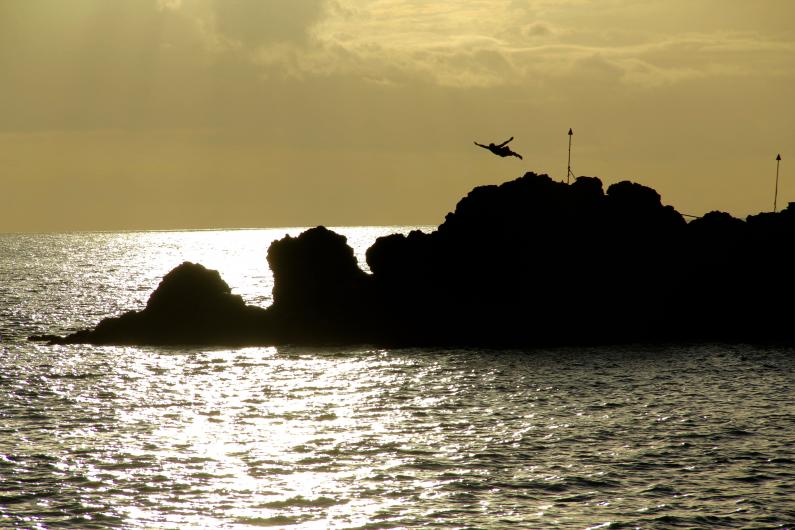 
Really, no cliff diving list would be complete without a mention of the fabled invention of the sport. Legend has it that King Kahekili began the tradition of cliff diving in 1700 in Hawaii. The story goes that Kahekili, also known as the “birdman,” used to jump up to two hundred feet.

The particular location, however, was fabled as the place the king forced his warriors to jump from in order to prove their bravery and courage. It was not only the height that made the jump risky. Hawaiian lore told that the location was a portal to the ancestral realm (the underworld).

Though the stories of King Kahekili and his jumping warriors cannot be verified in any substantial sense, there is a group of cliff jumpers routinely leaping from this location at sixteen feet. One of the resorts conducts a nightly reenactment of the fabled story, ending in a cliff dive.

Of course, Hawaii draws hopeful cliff divers to numerous other jump points, but Kaanapali Beach was the birthplace of it all. Though the king jumping two hundred feet into water is likely a stretch of the story, there is no arguing with the fact that Hawaii was the birthplace of the sport. 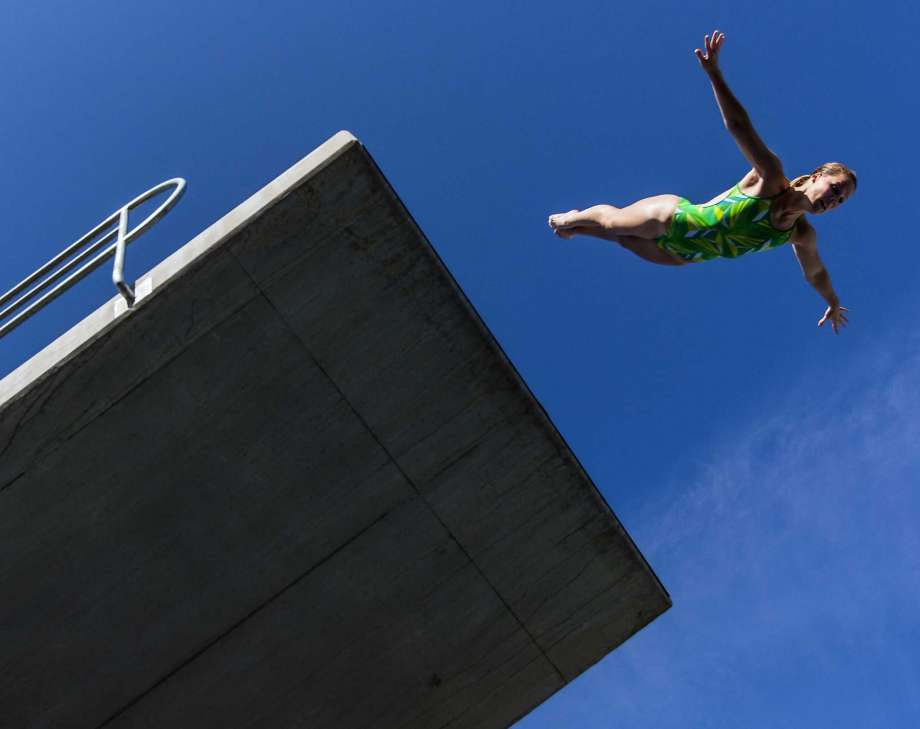 Though women have likely dived off cliffs into the water nearly as frequently as men have, women were not allowed in the World Cliff Diving competition until 2014. Though several women competed in that first year of the event, Rachelle Simpson was the first winner crowned.

See also  30 Things to do in Manitou Springs, CO

Prior to jumping off cliffs, Simpson was a gymnast and even worked as a professional acrobat for two and a half years. That is where she gained the diving experience which emboldened her to apply for the cliff diving competition. She went on to win all three events of the competition.

Her final jump in the competition took place at Polignano a Mare, Italy. All the women in the competition jumped, but Simpson outshone them with her perfect flips. After that initial year, Simpson continued to participate, going on to jump the full eighty-eight feet a couple of years later.

Unlike most cliff divers, Gary Hunt actually claims to be afraid of heights. According to him, he envisions diving off of any high location. This means that places without water are terrifying to him. Despite his trepidation, he managed to win the 2015 World Cliff Diving competition.

Before the culminating jump at Possum Kingdom Lake in Texas, Hunt had already secured wins in the previous two jump categories. It is extremely rare for a single diver to successfully win all three events during the World Championship. He also conducts the most difficult dive of anyone.

His dive, nicknamed the “double in, double out,” consists of three front somersaults and four and a half twists in just under three seconds of air time. While the height from which Hunt drove at Possum Kingdom Lake may not be the highest, the dive is by far the most difficult completed.

Also, with that winning dive, Hunt set a new overall record, scoring 533.90 points overall. This put him nearly sixty points ahead of the second-place winner, the legendary Orlando Duque and nearly seventy points above ArtemSilchenko, another veteran cliff diver. 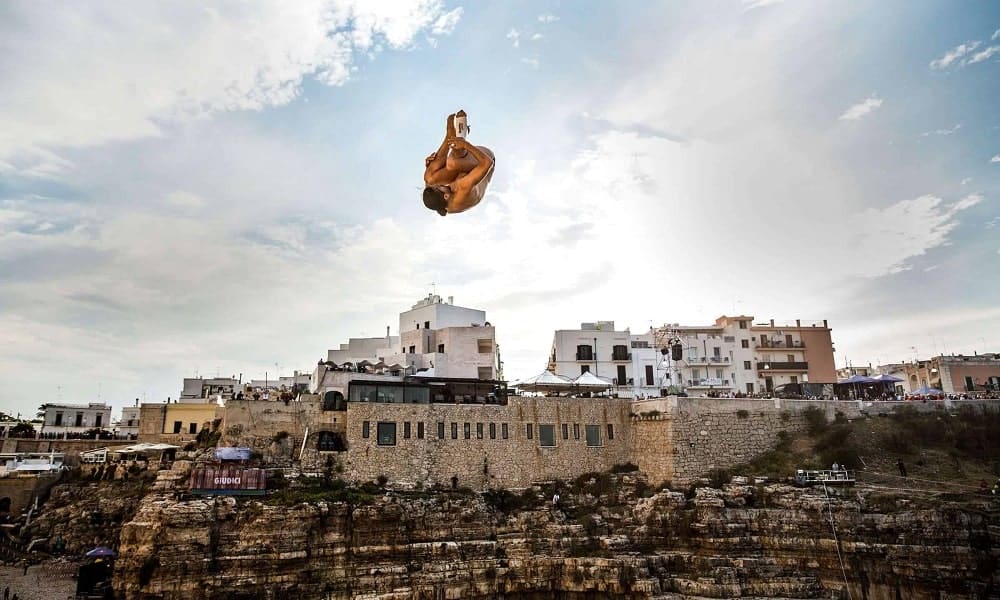 Orlando Duque holds many of the highest cliff jumping records and is one of the repeat competitors at the World Cliff Diving competition. One of his most intriguing jumps, however, was not from a cliff at all. Instead, he leaped from the Opera House in Copenhagen, Denmark.

Most cliff jumps take place in natural environments, so this posed a new challenge for Duque. For the event, a small plank was added to the roof of the Opera House for him to dive off of. Though, the roof on its own is over two hundred feet long, so it juts out over the water already.

The dive direction faced the Queen’s Palace in Denmark, offering up a spectacular view for Duque as he prepared for his dive. The water at the deepest point outside the Opera House is about sixteen feet deep, which provided Duque plenty of cushion for his cliff dive.

As with many other cliff dives of late, this dive was sponsored by Red Bull, the energy drink company as part of their extreme sports sponsorship. Without their help, it would be highly unlikely for an Opera House to allow a person, no matter how renowned, to jump off the roof. 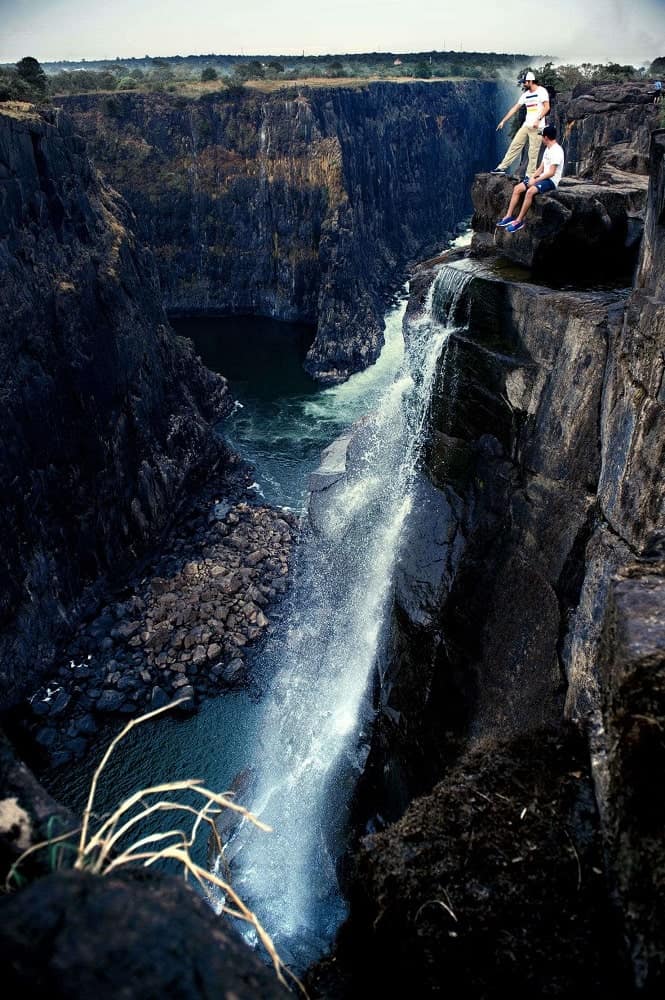 Victoria Falls in Zambia is classified as one of the Seven Natural Wonders of the World. It is not your typical location for cliff jumpers. This is largely due to the same reasons outlined above for the dangers of waterfall diving. This did not stop Orlando Duque and Jonathan Paredes.

While the height and undertow are enough to make even the seasoned diver shiver, the risk is even more extreme with the murky waters of the Zambezi River. The scuba divers tasked with locating the divers after the jump could easily lose them in the foggy haze of the water.

Though Duque was the older of the two divers, both men had many years of experience and several world records prior to attempting the jump. On top of that, they did not try to synchronize their jumps the first time. After the initial jump, though, they did complete a second tandem dive.

Perhaps the most impressive part of Duque and Paredes’ famed cliff dive is that they came away unscathed. While most cliff divers jumping from a hundred or more feet suffer some slight injury, these two intrepid divers surfaced without injury, up to a second dive immediately after. Before venturing into the cliff diving scene, John Tobler was a world-renowned gymnast. This experience tumbling gave him the background necessary to attempt the hundred-foot dive off of the cliffs at Acapulco, Mexico. The same year three other divers died attempting the jump.

The main difficulty with these particular cliffs comes from the distance needed to clear the cliff’s edge and hit water deep enough to cushion the impact. The diver has to jump outward by thirty-six feet in order to land in the necessary twelve feet of water at the basin. This is no small task.

Before Tobler’s jump, two other American divers attempted the dive. The first broke his eardrum and the second sustained a head injury by landing in the shallow water. In response to the failed dives, the Americans with Tobler wanted to build a plank. Tobler, however, would not allow it.

After months of preparation (including diving from the Lowry Bridge 80 feet into the Mississippi River), Tobler traveled to Acapulco for the main event. Rather than completing the jump with a traditional swan dive, Tobler threw in a couple of flips. He was, after all, a world-class gymnast. 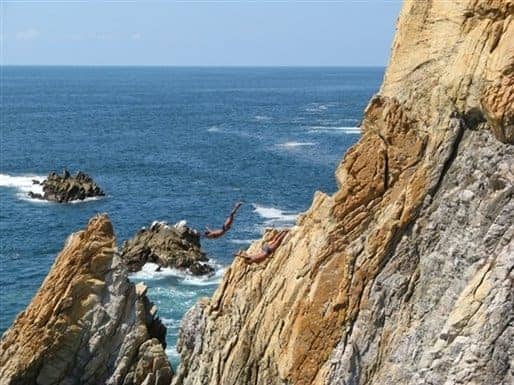 The La Quebrada Cliff Divers have been leaping off the hundred and forty-eight cliffs above Acapulco as a team since 1934. The team has been a bit of a tourist attraction for the area since its formation. The tradition of cliff diving at this location, however, goes back farther than 1934.

The early cliff divers were organized into a team by Teddy Stauffer, who is credited for turning Acapulco into a resort. To make them even more visible to the world, the diving team was featured in Elvis Presley’s film Fun in Acapulco in 1963. The world has not looked away since.

The key for the La Quebrada cliff divers is all in the timing of the dives. While tourists can catch the diving show several times each day, those times are carefully chosen to match the highest tides. The water at the cliff can be anywhere from six to sixteen feet deep, depending on timing.

For other professional cliff divers, the cliffs at La Quebrada hold a special attraction. The location is beautiful and the storied and traditional diving culture still hold an allure. Each year, the location attracts cliff divers and onlookers alike for the time-honored diving show. 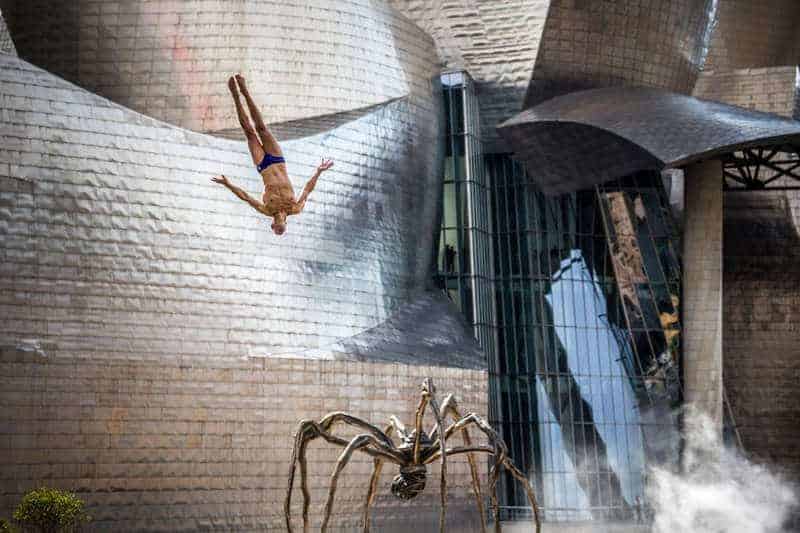 Thus far on the list, all the cliff divers have walked away unscathed from their record-breaking jumps. Unfortunately, that is not always the case. For Oliver Favre in 1987, the dive did not go spectacularly in the end, though he did technically jump from a higher height than anyone else.

The rigging involved a huge ladder built on top of the cliffside to make the distance over the water even more extreme. The cliffs at Villiers-le-Lac are already dizzyingly high, so adding the ladder brings it up to a nauseating hundred and seventy-seven feet above the water.

While in the air, Favre completed two somersaults in the air before hitting the water feet first. Perhaps even more daunting, Favre dove in backward, meaning he could not see his trajectory when he originally left the platform. This makes everything a bit more complicated.

While the height is impressive regardless, Favre’s jump did not break any records due to being classified as an “attempted” dive rather than a successful one. This is owing to the fact that Favre sustained a broken back (from which he recovered) from the impact and had to be rescued. 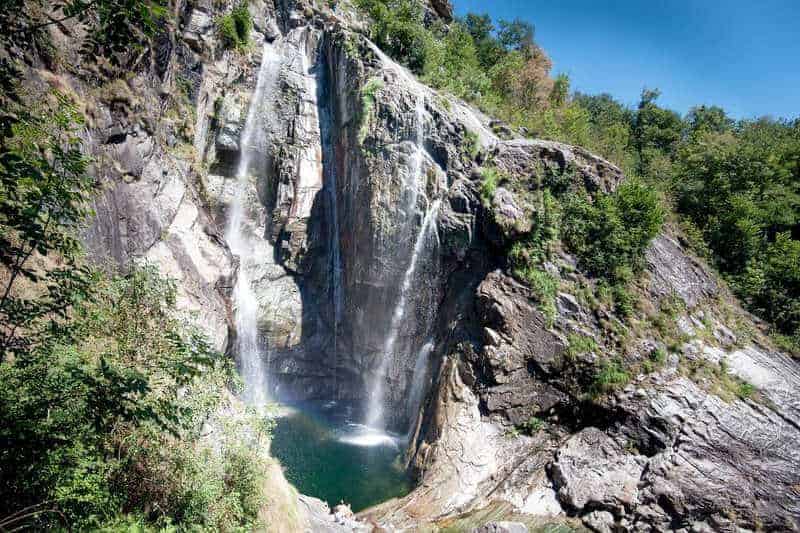 As of 2015, all other world record holders for cliff diving were dethroned by Laso Schaller. At twenty-seven years old, Schaller could be at the beginning of his career, taking the place of the previous cliff diving giants. His hundred and ninety-three-foot jump certainly highlighted him.

See also  6 Ways to Include Your Kids on Outdoor Adventures

Like many other extremely high cliff dives, Schaller’s team built a platform to ensure Schaller cleared the rocks and outcropping along his descent. As another precaution, the team surveyed the bottom of the pool to ensure the area was free of rocks and deep enough to dive into.

As with many other cliff divers, Schaller grew up as a gymnast and on the high-dive. Now, he works as a canyon guide and participates in high-dive shows, routinely completing twenty cliff dives per day. In short, this adventure seemed the natural progression to his other diving exploits.

The goal was to land in the aerated water near the base of the waterfall because it is softer. Schaller, however, overshot slightly and landed in the harder water in the middle of the pool. Luckily, because he is accustomed to cliff dives, he swam out with a only slightly dislocated hip.