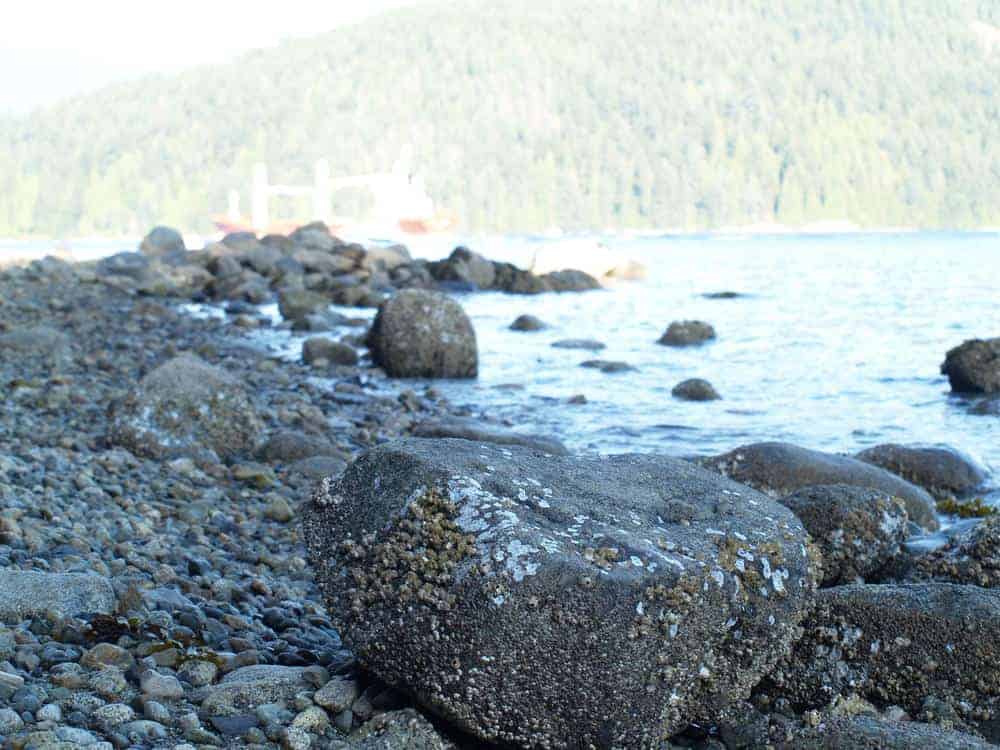 While I love the North Shore in Vancouver, British Columbia, the traffic is horrendous almost all the time.  Worse yet, you no sooner battle traffic to get to a recreational place such as Ambleside Beach, Rice Lake, or Lighthouse Park, and then you can’t find parking because everyone heads to the same places on the weekend.

I debated even writing this about Cates Park because the last thing it needs is to become overrun like all the other North Shore destinations.  After a lot of back and forth in my mind, I thought “what the heck”, probably nobody will read this so why not publish it.

The beach runs along the length of the park so there’s plenty of beach area for lots of people. It’s a rocky beach for sure, but in the Summer the swimming is wonderful.

You need to find the areas with not so many large rocks in the water. They do exist. You just need to check out several sections of the beach, each has separate access points.

Our favorite during the day is the eastern beach area; at night it’s the western beach area because it doesn’t fall victim to shade so quickly. In fact, you can watch the sun go all the way down.

There are loads of small crabs.  Many people crab at Cates as well either directly off the beach or off the pier which is located on the western side of the park.

See also  Ambleside Beach Review and Photo Gallery – Worth Going to for the Day?

Our older boy finds tons of small crabs, starfish, spots jellyfish and plenty of shells.  He loves combing the beach for all kinds of beach wildlife.

There are spots of sand so beach toys such as buckets, shovels, etc. are definitely worth bringing.

When the tide is in, there isn’t much depth to the beach.  When the tide is out, it’s still a relatively small beach but the setting is beautiful at the entrance to the Indian Arm.

There usually isn’t a lifeguard on duty so you’ll have to be vigilant watching your kids.  We always have our boys wear a life vest (part of our staple beach checklist).

There are public bathrooms in the park area.  They are at the rear of the concession.

Wally’s Burgers runs the concession.  The burgers are great as is the ice cream.  They’re very generous with their ice cream scoops.

My biggest beef with Wally’s isn’t the food.  The food is great for beach fare.  My beef is they aren’t open in the evening.  Many evenings we’ve headed there and would love ice cream or a picnic but it’s closed.  Given they’re the only concession in the park, it sure would be nice if they stayed open longer.

There are a few picnic tables scattered throughout the park which we use regularly.  Plenty of large parties picnic there every day of the week so be sure to get their early to secure your table.  Like most parks, it’s first-come, first-serve.

A highlight for all kids is the playground at Cates Park.  It offers challenging climbing for older kids as well as easy to navigate monkey bars for young kids.  There are a baby swing, captain’s chair swing, and two regular swings.

The rocking ship is a huge hit for many kids.  My husband loves to rock it for throngs of kids.

On the side of the playground is a water fountain that comes in handy for refilling water bottles when there for hours.

There are large, open grassy areas throughout the park which is fabulous for soccer, frisbee, catch, and just for kids to run around.

With trees everywhere, it’s a great park for hide-and-seek, tag, and other park games kids come up with.

That said, there is not a formal soccer field or baseball diamond.  It’s just large areas of grass. 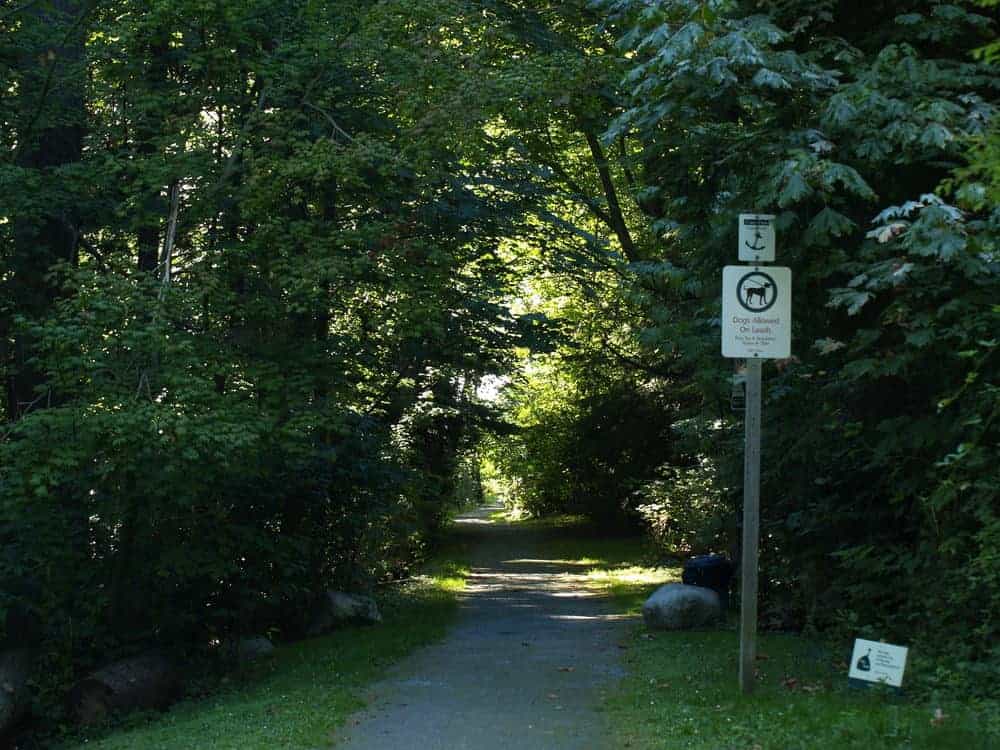 The walking trails at Cates Park North Vancouver BC.

There are walking trails throughout the park.  There’s a great trail on the east side of the park that leads to another small park.  It’s a short 10-minute stroll along which are stairs to different sections of the beach.  It’s a great little stroll at any time of the day.

Seldom is there no parking available.  There are a couple of overflow parking lots.  All in all, there is a ton of parking but if you end up in overflow, it’s a bit of a hike to the beach area.

Yes, parking is free, but there’s a three-hour limit. 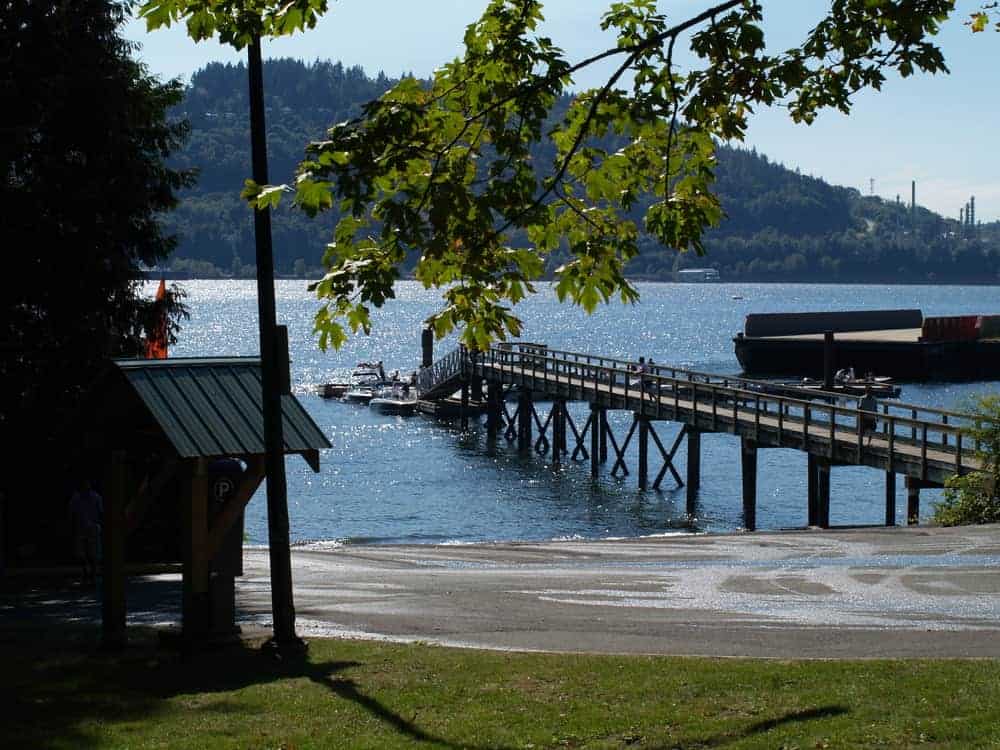 The boat launch at Cates Park in North Vancouver, BC.

The boat launch is super popular. There’s a fee, which I believe is $20 (we don’t have a boat to launch).  The launch is located on the west side of the park fairly close to the entrance.  You can’t miss it as you drive down into the park… it’s next to the pier.

It’s a large boat launch which can accommodate two boats going in or coming out at the same time.

Boating in Indian Arm is fantastic because you can headway up the arm, check out beaches and untouched wilderness.  It’s also a great place to launch to head out to Burrard Inlet and then past Stanley Park and beyond.

If you make it to the top of the Indian Arm, you can see the historic Royal Vancouver Yacht Club there which is pretty cool.

A Gem in the East

Cates Park is truly a gem of a beach and park on the east side of North Vancouver.  We’ve spent entire days there or a quick one hour stop in the evening.