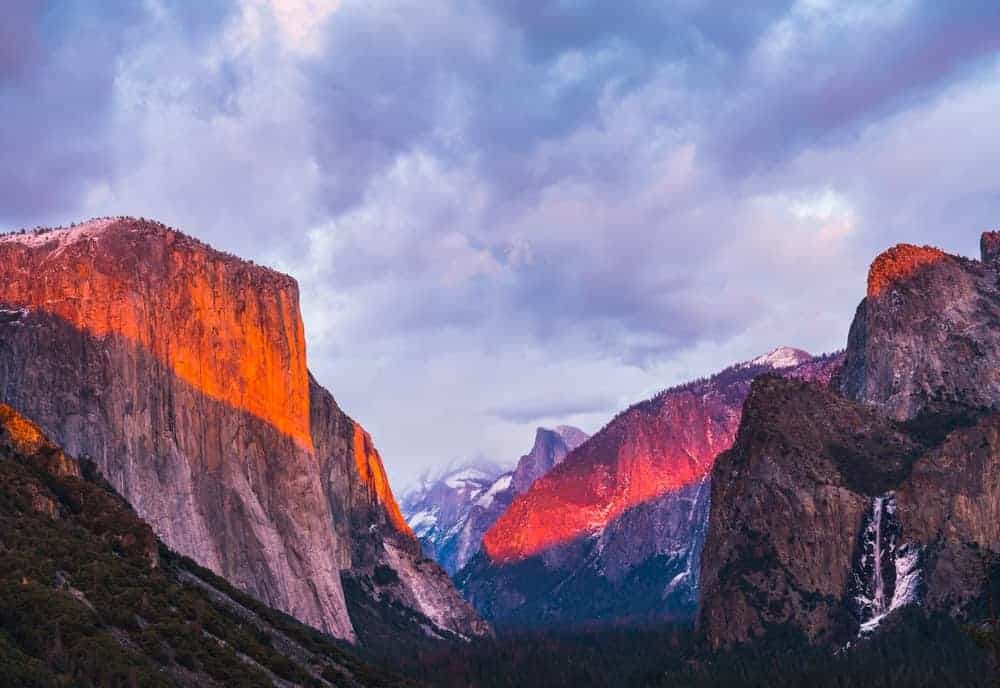 If you’re into hiking, mountain climbing, or just love the great outdoors in general, you could hardly live in a better place in the United States than California. Despite its “Hollywood” reputation, there are plenty of spots on the Golden State to get outdoors, get away from smog and crowds, and enjoy the great wide open spaces of California.

Best of all, the almost year-round fantastic weather of California means that almost any time you can get out there- you’re almost certain to enjoy yourself free from ice and sleet, although rain can be quite common during the winter season.

Here, we will cover some of the greatest Californian mountains for climbing, hiking, and just enjoying the boundless natural beauty. 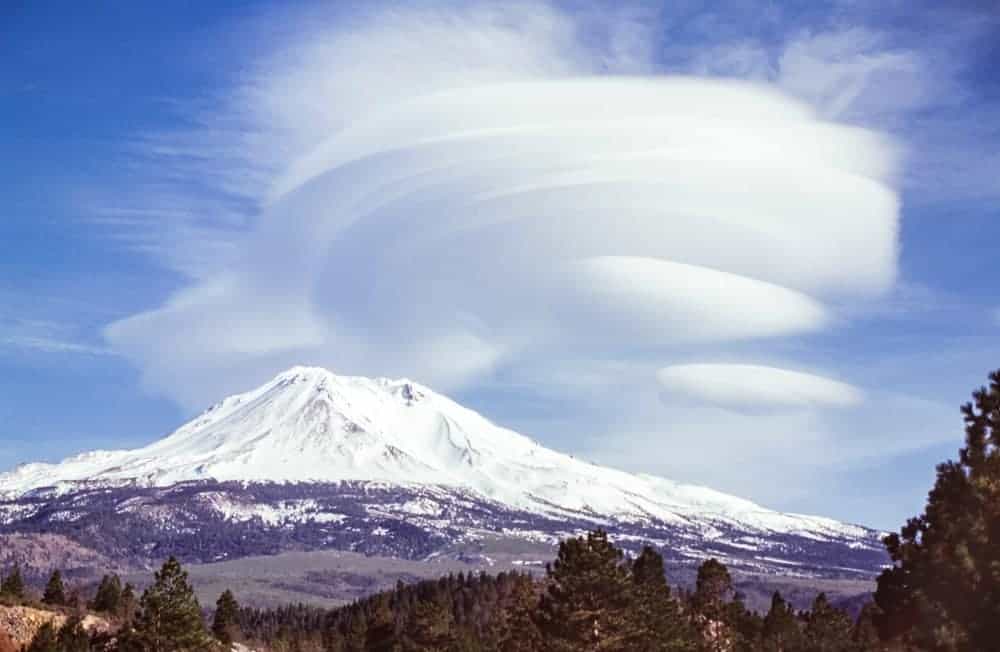 Standing at just over 14,000 feet or 4322 meters tall, Mount Shasta might be the most famous mountain in the Golden State with the possible noteworthy exception of Half Dome. Located in the heart of California’s famous great black forests, Mount Shasta is a part of the Great Sierra Mountain range. It has frequently been described as a shining white pyramid as it is covered with snow almost all year long- at least from the peak to about 25% of the way down.

Mount Shasta stands alone in its place in central/northern California. Nearby towns include Redding, Anderson, Red Bluff, and Eureka. These are small communities, all of which are dwarfed by the magnificence of the mountain they share.

The difficulty rating for climbing Shasta is set at “Difficult to Hard.” This is for good reason, The total climbing trail is over 10 miles in length, and it is completely covered in snow most of the year. Much of that snow will be concealing rock- which makes it even more hazardous. Climbing Mount Shasta is recommended only for the most experienced mountaineers who are well preprepared and in top physical condition. 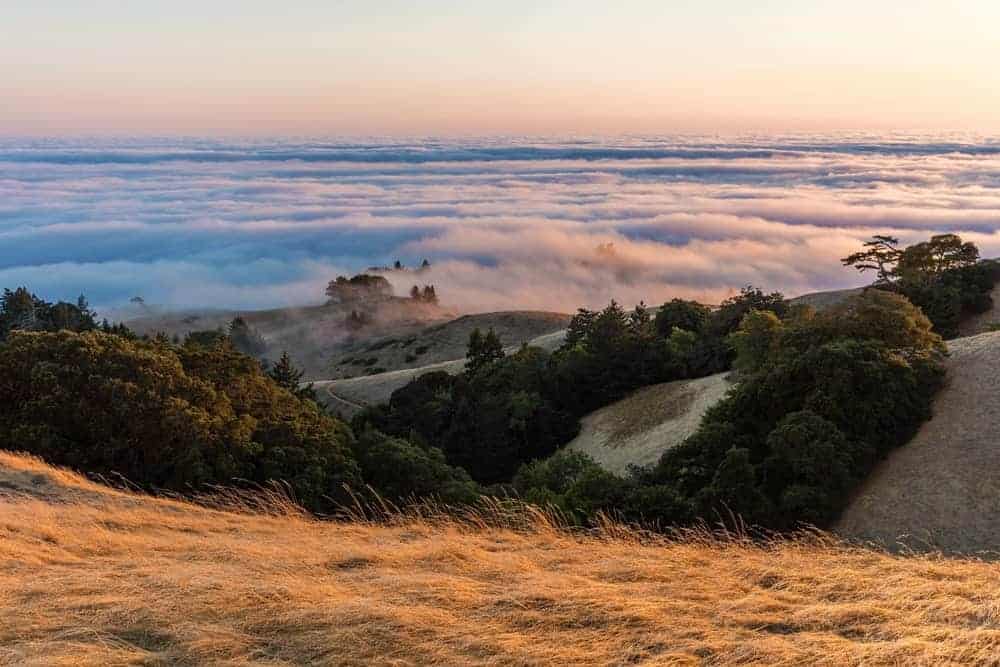 Standing at just 2572 feet or 784 meters, Mount Tamalpais is amenable to all manner of outdoor activities all year long. It’s a great place for hiking, climbing, bouldering, scrabbling, or just casual walking. The difficulty rating for climbing here is rated as easy to intermediate.

There is a range of trails to choose from. Some offer simple trails to climb and other rock faces. The different trails offer variable difficulty which is usually posted at the start of the trail. But the amenable weather and the forgiving mountain terrain if Mount Tamalpais makes it a great place for anyone to casually enjoy.

Located in the area of semi-coastal Marin County, Mount Tamalpais serves a community that is well accustomed to having much attractive hiking and outdoor opportunities available to them. This location is an excellent place to take a family with children and to give them a pleasant introduction to the great outdoors in a beautiful and friendly environment. 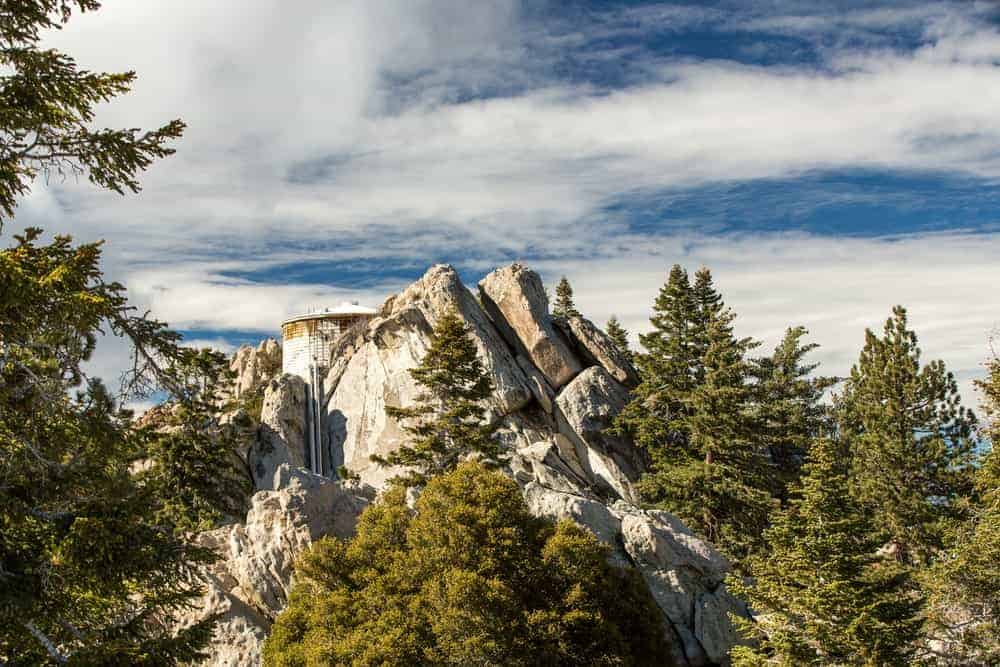 Measuring at over 10,000 feet or 3048 meters, the San Jacinto Mountain Peak is another great place for family and children to become acclimated to the great outdoors with little risk and a little challenge. The difficulty rating for this mountain is listed as “walk-up.”

This means you can expect to be able to leisurely walk from your parking spot to the top of the peak without using your hands. You may have to work up a sweat and you may get out of breath, but for experienced climbers and people in great physical condition, this mountain location will be like a walk in the park. 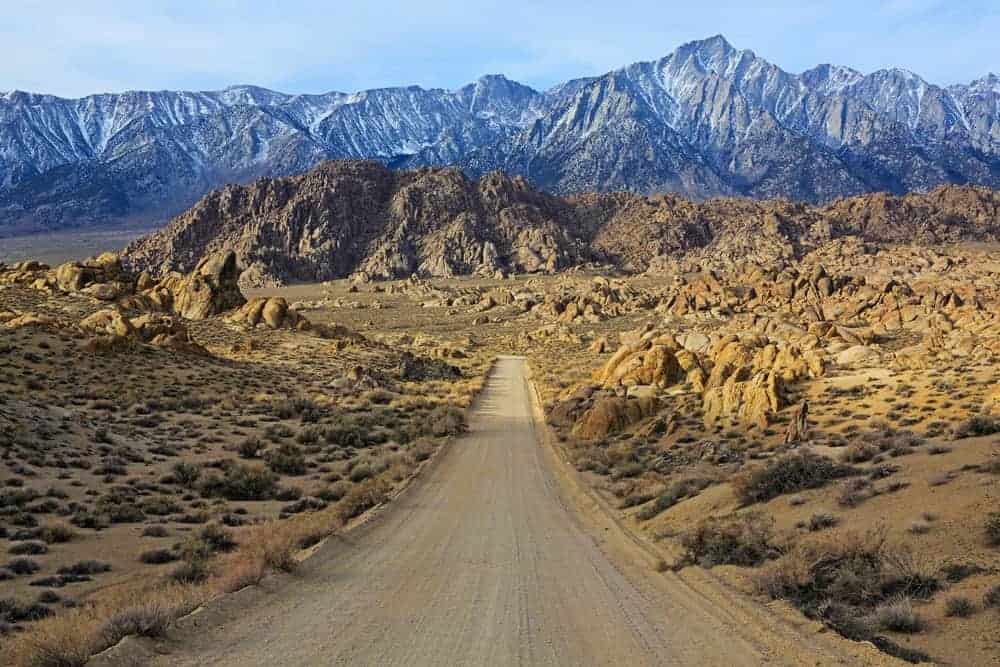 While this mountain is best suited to sport climbing, it is considered to be of intermediate difficulty for that purpose. For those who simply wish to hike these mountains or explore the complex and rocky features, the difficulty level is low. Only in the rainy season should these mountains pose any significant challenge to visitors. During the summer months, they will be quite hot. Visitors are advised to bring plenty of water.

This area has a lot in common with the rocky expanses one sees in Nevada and Utah. Indeed, they are directly connected to those climates, and they have many similar features. It bears repeating that visitors are advised to be well prepared with water and mobile shade. There is also a moderate risk of encountering venomous snakes and scorpions.

It is located near the town of Lone Pine which is set on highway 395. 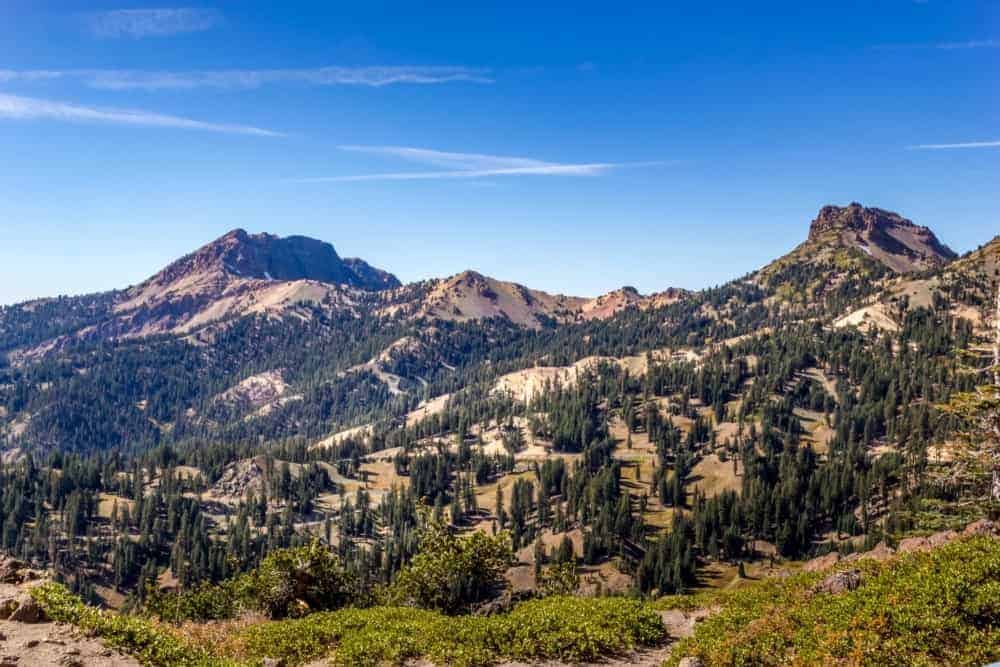 Located in the Lassen Volcanic National Park, Mount Diller stands at a moderate 9087 feet in height, or 2770 meters. The nearest highway is Highway 89, and there is a 4-mile hike from the base to the peak.

The difficulty level is rated at medium to low, but this is largely due to the fact that it is dotted with snow and rocky. Most hikers can easily expect to be able to reach the peak by simply walking from the bottom to the top as there are few opportunities for true climbing.

Mount Diller is the remains of what was once a mighty volcano, which was known as Mt. Tehama. Tehama obtained its maximum height over 300,000 years ago and has been dormant for longer than humans have inhabited the area. 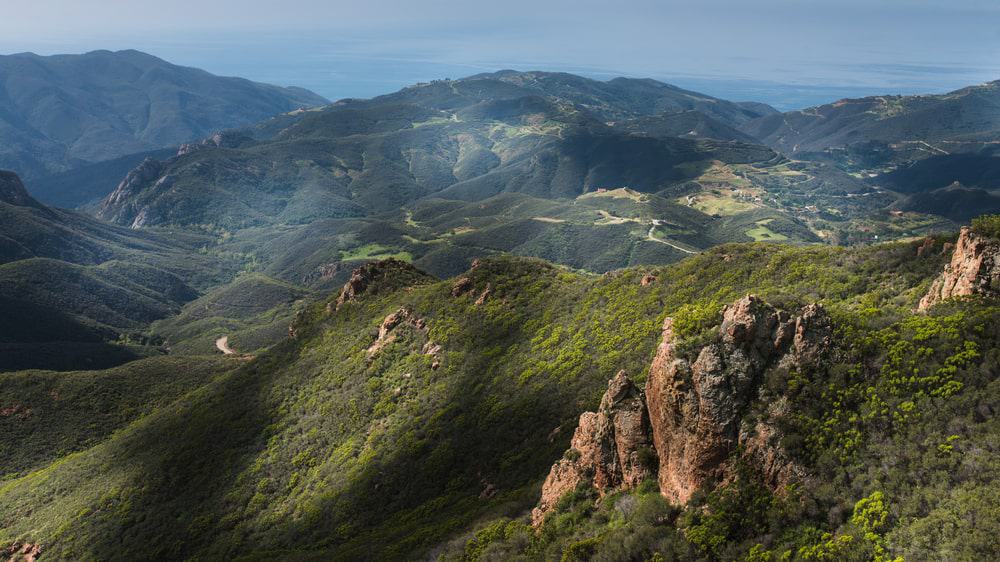 A part of the Temescal Canyon Loop- one may notice the similarity of the name of the parent mountain range to Mescaline, the infamous shamanic drug of the Sonoran desert. Of course, as any Californian resident knows, this landscape and the connected Mexican desert areas are very similar in climate, and in their overall nature.

Standing at 3,111 feet or 948 meters tall, at its highest point, the Santa Monica Mountains are a great spot for hiking, traditional climbing, sport climbing, top-rope, bouldering, scrambling, and climbing.

It is rated as intermediate in difficulty, largely due to the warm climate. The terrain can be challenging, but it is rarely dangerous unless a visitor explicitly seeks out danger.

The climb to the highest peak is less than two miles, but it is the entire range of these medium-sized mountains that draw people in. 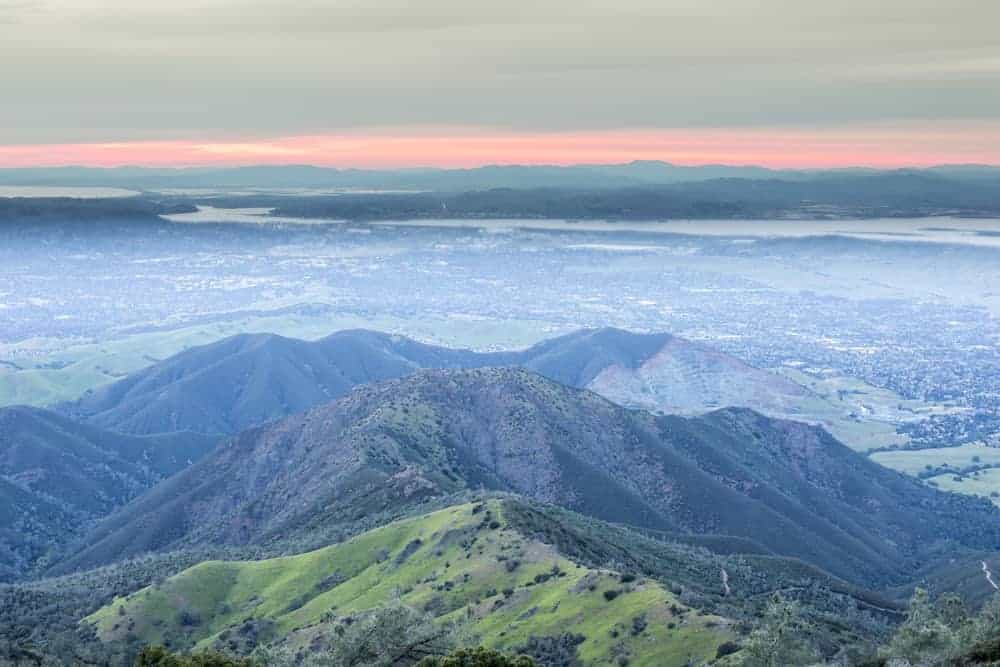 Located in a mountain range that is rarely visited even by locals in the San Luis Obispo area- Eagle Peak is not well known or well visited. It is considered to be best for hiking and the difficulty level for this activity is rated at medium to low. Most of the climbing can be expected to come in the form of uphill walking.

Standing at just 2369 feet or 722 meters, the biggest reward to be had at Eagle Peak is to reach the top and see that there is a truly endless number of medium-sized green mountains stretching beyond the ability of the eye to see. One feels that one has entered a world of trees and mountains.

But perhaps the most compelling thing about it is the feeling that these endless mountains are not forbidding in the least- that one could indeed walk forever in them. It inspires a feeling of potential freedom that is hard to match.

The closest town is Clayton, CA. But more people will be familiar with San Luis Obispo, which is about 20 miles north. A nearby nuclear power plant is named after Diablo Canyon and sits on the coast, hidden from view by mountains. 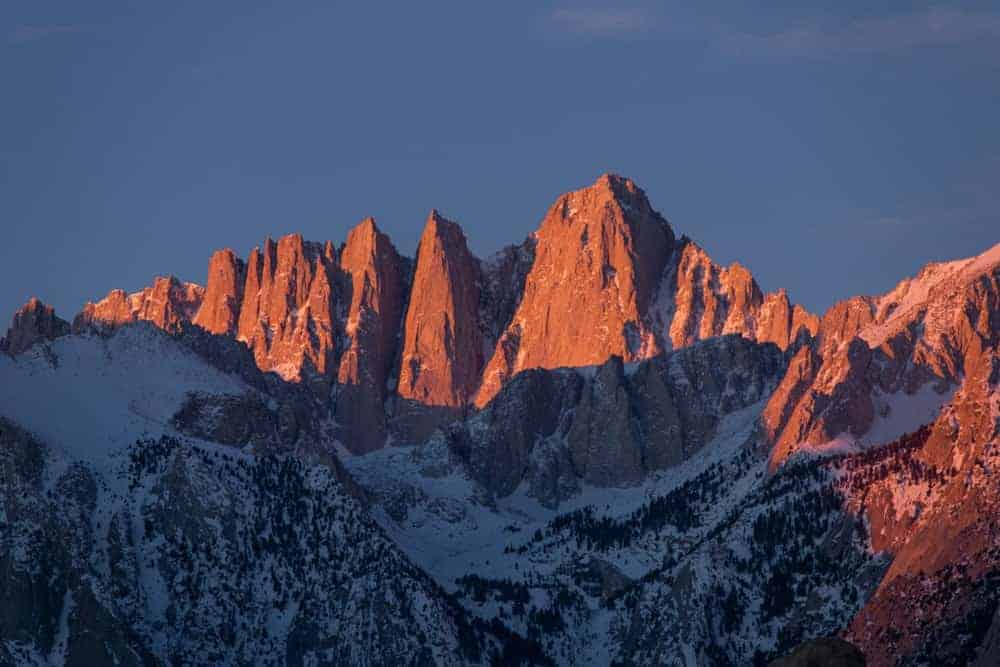 This mighty mountain stands at 14505 feet tall or 4421 meters. It is a part of the California Sierra Nevada and it boasts numerous distinctions. Mount Whitney’s elevation has intrigued the human mind for as long as humans have been in the area. Its elevation is continually evaluated and reevaluated using the new technology. This is because its height is perpetually increasing at a rate of about two inches per year.

When it comes to climbing Mount Whitney, this is no task for the faint of heart. The mountain is tall, made from steep and treacherous rock faces on every side. It is nearly or totally frozen year-round at the summit. Climbing the mountain has a rated difficulty level of Advanced. Only the most experienced, most professional, most physically fit, and most well-organized groups of climbers are permitted to climb this mountain. Many have tried, and many an unwary climber has perished in the attempt.

There are many Native American legends that surround Mount Whitney with an aura of fearsomeness and dread. Nearly all of the nearby streams, rivers, and other bodies of water have connections to tribal stories of evil spirits. These are believed to be connected to largely to hazardous organisms living in the water which infects those who drink, causing death- or causing illness that makes the cold and rugged environment intolerable.

See also  6 Ways to Include Your Kids on Outdoor Adventures

It offers more of a straight line to the top than the main trail, and it is significantly less crowded. Regrettably, the Forest Service has decided recently that a day permit is required for admission to the North Fork. They lump the Mountaineer’s Route in with this package- which means if you want to take the fastest and more direct way to the top- it will cost you. That means climbers have to hope that there will be an open slot when they appear at the permit office. Overnight permits, thankfully, are the same as they have always been. 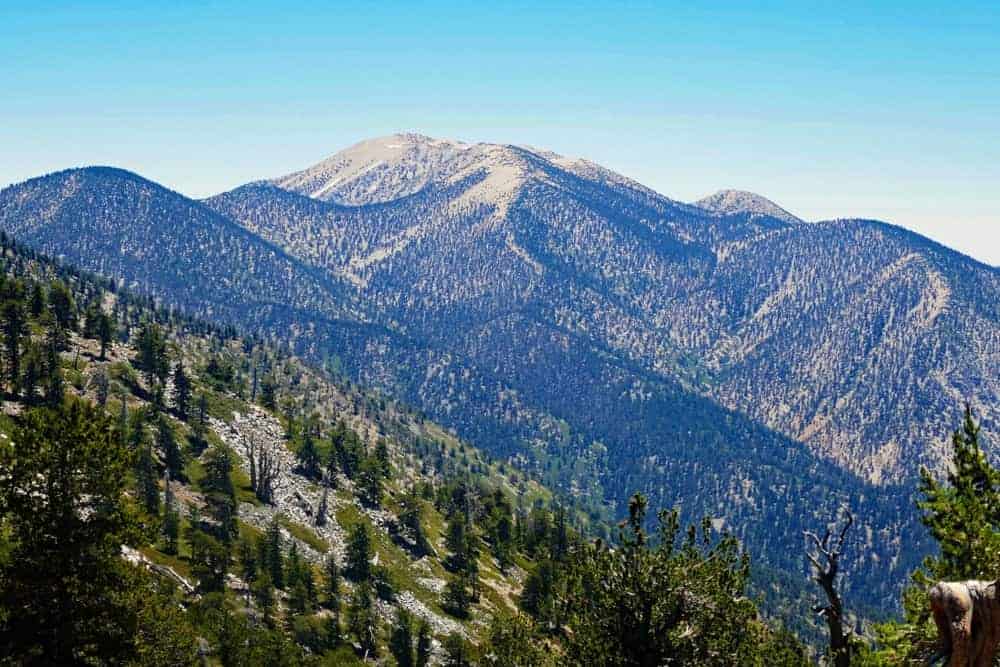 The San Gorgonio Mountain is deceptively tall. It looks like a mere foothill from some perspectives, but it is actually just under 11,500 feet in height or 3505 meters tall. The nearest town is South Cucamonga.

Known also as “Old Greyback”, it is the tallest mountain in Southern California. It is a popular site with several trails that lead up to its summit. The Fish Creek trail is likely to be the least used of all and is just over 9 miles in length. The South Fork Trail is more than 10 miles in length. The shortest, and the most popular route to the peak, is Vivian Creek Trail. It is 7.8 miles in length with nearly a 5,500-foot elevation gain. The summertime tends to bring the biggest crowds but it is a wonderful mountain to climb any time of year.

See also  7 of the Best Places to Hike in Bastrop County, Texas 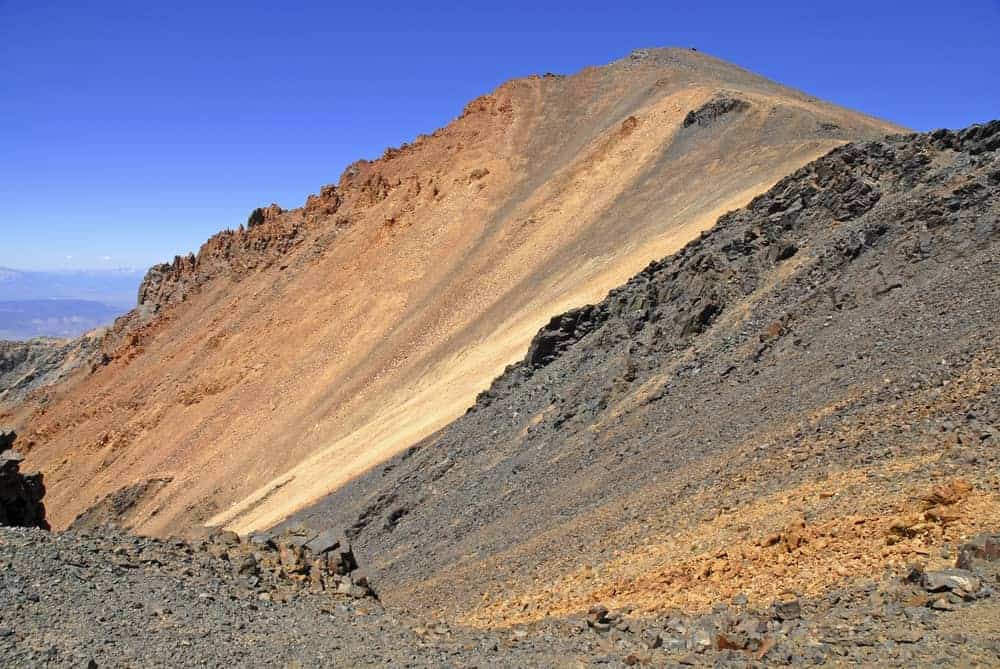 Standing at 14,246 feet high or 4342 meters tall, White Mountain Peak is to the north-east of the town of Bishop, CA. It is a part of the Inyo-White Mountains which are made up of some of the oldest sedimentary rock in the state of California with fossils that are nearly 600 million years old.

The White and Inyo Mountains stand in the rain-shadow of the Sierra Nevada. This gives it its dramatic desert-like appearance and creates the ideal conditions for some of the world’s oldest living trees, the Ancient Bristlecone Pines.

The oldest of these trees is known as “Methuselah,” and is over 4,700 years old. Methuselah’s tree-rings have been used to create records dating back for more than 8,600 years. These trees can be seen off of White Mountain Road. The summit gives fantastic views of the Eastern Sierra Nevada and the Owens Valley.

The most frequently used trail, the South Face route is just over seven miles in length. It is the most popular route and follows a 4WD road to the peak making it the easiest route to the summit of any Californian mountain in its “14er” category.

The difficulty of this climb is rated at intermediate. However, it is worth noting that this is not an ideal place to bring family or children under 14 years of age. 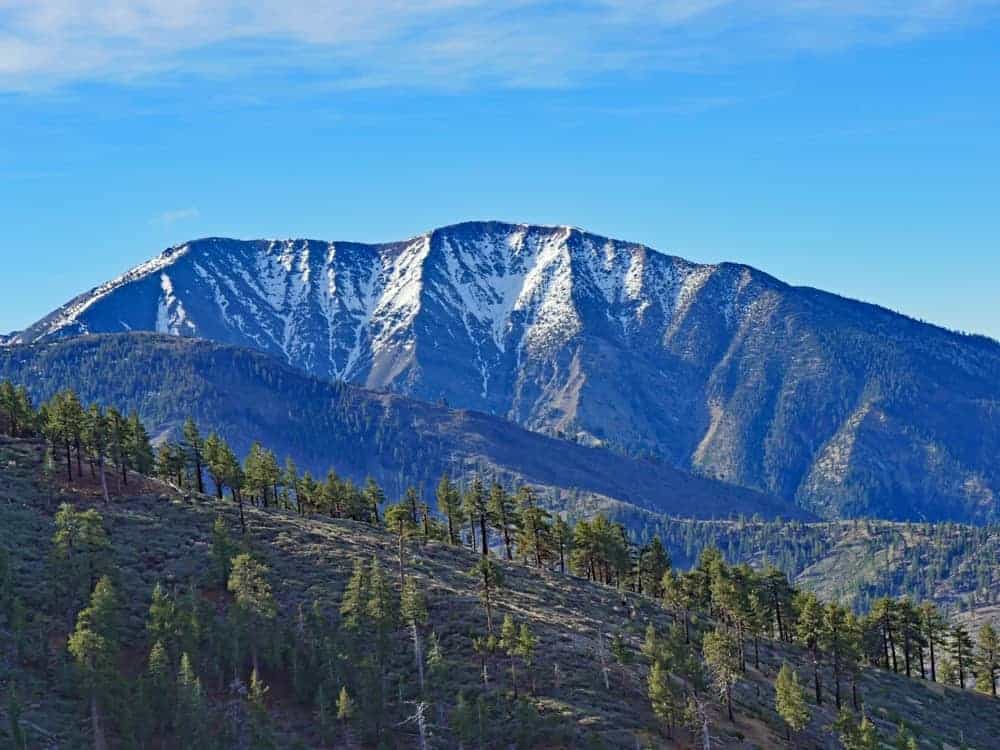 It is one of the most frequently photographed natural objects in the Southern California region. Its snow-topped peak has made appearances on postcards, tourist literature, posters, and moreover many years.

Four popular routes take climbers to the peak of Mount Baldy. All four are considered to be of moderate difficulty. They range in length between 8.5 to 13 miles and come with an elevation change of anywhere between 3,600 feet to 6,000 feet. All of these routes can be hiked all year round. However, you will need to bring your snowshoes or crampons and an ice ax during the winter months.